The Bridgwater & Taunton Canal passes through the Parish of Creech St Michael.

BRIDGWATER & TAUNTON CANAL THROUGH THE AGES

The Canal was engineered by James Hollinsworth and originally opened in 1827. The original section ran from Taunton to Huntworth where it joined the River Parrett.

In 1837 it was extended from Huntworth to Bridgwater dock where a lock was made to join the River Parrett. This was to be blocked off when the docks closed to coastal shipping in 1971.

In 1866 the Canal was under considerable pressure from the railway and was sold to the Bristol & Exeter Railway Company, although control eventually passed to the Great Western Railway. They were not interested in promoting commercial traffic to the Canal and slowly this traffic declined in preference to the much quicker railway. In 1907 the last barge tolls were collected after which the Canal became a water course.

In 1947 the British Transport commission took over responsibility of the Canal and later on in 1962 the British Waterways took over its management.  The canal is now managed by the Canal & Rivers Trust.

The Canal was one of the first canals to commercially carry water for Wessex Water when they needed more capacity during the summer months in Durleigh Reservoir. Wessex Water had a commercial agreement with the then N R A and British Waterways to pump water from the Canal to Durleigh. 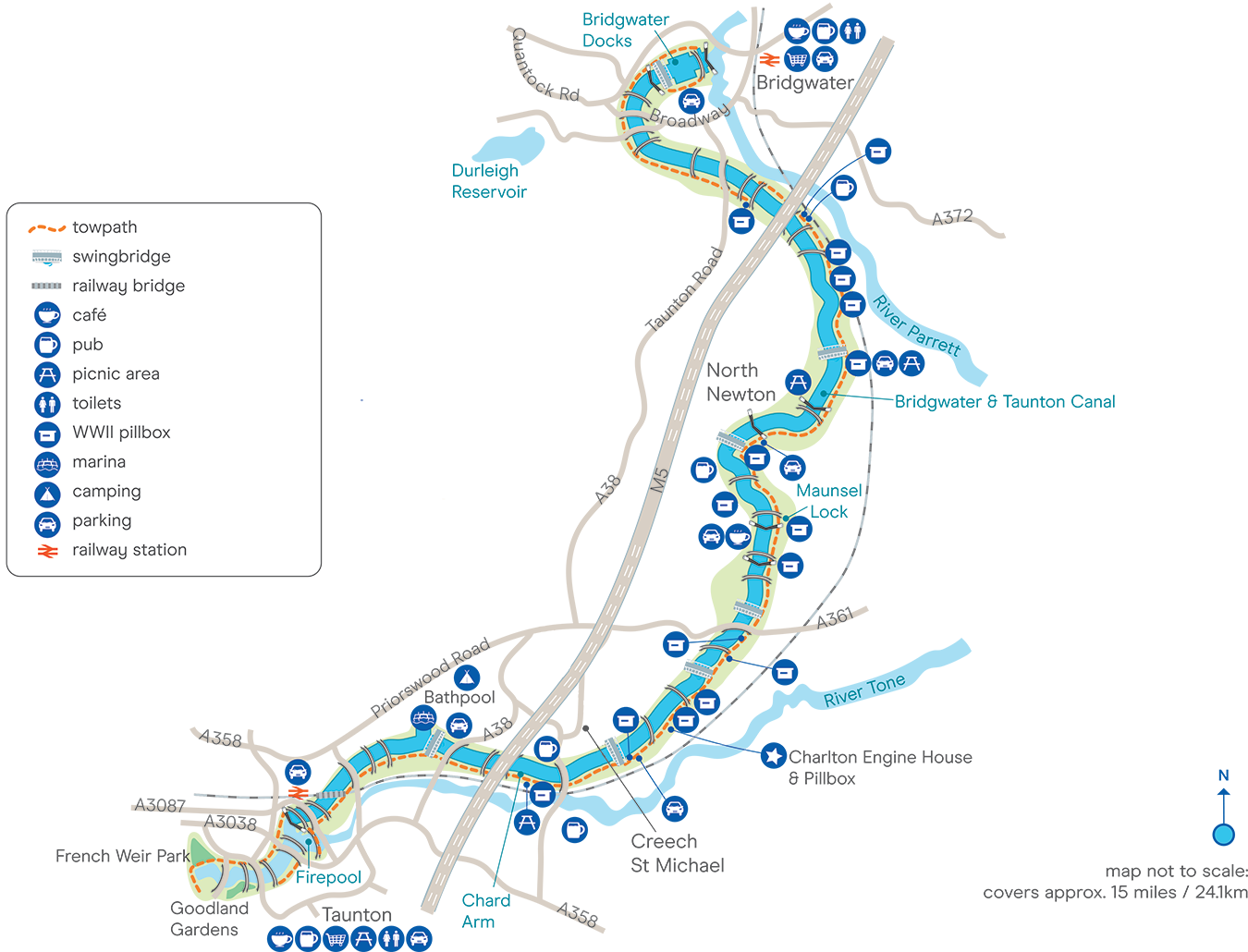 FROM DEFENSE TO LEISURE & PLEASURE

During the Second World War, the line of the river Axe, the Chard Canal, and the Bridgwater to Taunton Canal became a major defence line for the South West of England to stop Hitler’s forces should they invade the South West’s strategic docks.

All metal bridges were melted down for the war effort, and replaced with wooden structures that could be destroyed quickly.

There is still much evidence of this with many Pill Boxes and tank traps remaining. They were built along the full length of the defence line.

Creech St Michael was the junction with the Chard Canal which had a very short life, being opened in 1842, and closed in 1866. The junction was next to the Pill box (now overgrown). There is also a picnic table that marks the spot, opposite Crufts Meadow, which now fronts the Canal at this point.

Many old photographs depict a coal wharf, house and Inn called “The White Lion” at this junction, which was probably frequently used by the bargee’s at the time.

Another noticeable feature on the Creech section of the canal is “The Old Engine House” at Charlton. It was built in 1827 to pump water into the canal from the RiverTone, and originally housed a beam engine pump, then later two locomotive boilers which worked a centrifugal pump which delivered 125,000 gallons per hour.

It also later supplied the pick-up troughs fixed between the nearby railway lines, so that steam engines could pick up water from the troughs in the railway tracks without having to stop, saving valuable time for through express services.

This building was depicted as a backdrop in so many classic railway photographs over the years taken from Charlton Bridge.

Sadly the old engine house was partly dismantled and left derelict for many years. In 2003 it was given a grand makeover to turn it into a much admired residence that it is today. Many of the original features have been blended with more modern additions, incorporating the impressive high industrial looking wrought iron gates which depict its name, and date.

Today the Canal has been restored and is enjoyed by walkers, cyclists, boat users and watersports enthusiasts.

Narrowboat on the Bridgwater & Taunton Canal

Sign up for our regular newsletter and receive the latest updates from the Parish Council.

We treat everyone with courtesy and respect and ask for the same in return.  We ask that you treat your councillors and council employees courteously without violence, abuse, or harassment.

Councillors and council employees have the right to carry out their civic duties and work without fear of being attacked or abused. Any behaviour whether that be verbal, physical or in writing, which causes either councillors or council employees to feel uncomfortable, embarrassed, or threatened, is totally unacceptable.

The zero-tolerance policy includes abuse, aggression or threats made in person, over the telephone or in written communication, including on social media.

The council considers threatening behaviour to be:

Selected images provided © Paul Bradley and published with the full permission of the photographer. Image attributions for other materials used can be found here.